Karen Chance has put up the first four chapters of a free short story set in her Cassie Palmer world, the rest of the story to follow soon, hopefully.  This is the first of the short stories she’s writing to fill in the gap until the next Cassie book is released in summer 2011.  I’m still keeping my fingers crossed that date will be brought forward – in the meanwhile, I’m all for more Pritkin, Marlowe, and Mircea. 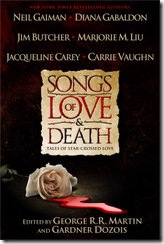 I just saw the table of contents for the anthology “Songs of Love & Death”, edited by George RR Martin and Gardner Dozois, and all I can say is I WANT.  NOW.  I started typing out the contributors that caught my eye, then realised I was pretty much listing all of them, so here is the full list instead:

It’s out in November, a whole seven months away.  The cover’s pretty cool too.

And Seanan McGuire has been nominated for the John W Campbell Award for best new writer, one of the big SF/F awards.  I totally adored her October Daye series, so yay for her nomination!  Full list of Hugo and Campbell nominees is also up at the AussieCon website.

5 thoughts on “Around the Web”