Heh – talk about ready-made content.  Here are the remaining books I read last April and added to Goodreads probably about a “couple” of months later.  Note I am still adding my 2011 reads there (umm… I think I’m up to September now – I mean, I hope I am), so take that timeline with a pinch of salt.

Speaking of Goodreads and the latest author/reviewer kerfuffles (I’m not adding any linkage, but if you’ve managed to miss the fun and want to know, ask!), I’ve been scanning through the numerous posts and commentary.  Just because.  I don’t think anyone’s made any new arguments, but one thing that did strike me was an example cited where an author said something along the lines of “I can’t believe she  wants to “fan” me on Goodreads after only giving my book three stars”.

Bearing in mind that was just ONE author and therefore not representative at all of the author community… it did make me think.  Because (and naming no names), I’m pretty sure there are authors that I “fan” (i.e. follow) there because I tend to love their books – however, let’s face it, not every book is great and if I’ve read quite a few of their books, there are bound to be a good distribution of grades in there.

Here’s my Goodreads rating breakdown by the way – you can see it’s sort of a normal distribution, skewed towards the positive: 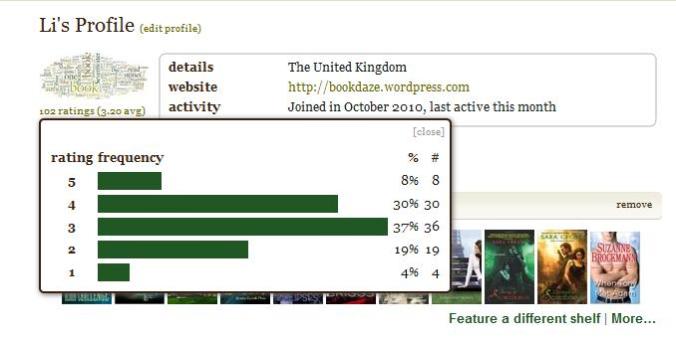 Do authors get upset if they see books rated “only” three stars by readers who call themselves fans?  I “fan” authors (off-topic, but ugh, I hate that phrase) because I want to see their new releases and posts on Goodreads, and either I’m too lazy to add their blog to my blog reader or they don’t have one.   Maybe it’s more terminology than anything else, and with Goodreads classifying you as a fan if you want to follow an author’s updates, using that function carries slightly different connotations to what I’m using it for.

So did I have a point to this?  Uh, not really.  Only that I may think twice about listing myself as an author’s fan, especially if I’m not going to be one of thousands.  Maybe.

If you’ve read this far, well, on to the rest of my April reads – and hmm… this is possibly the more negative half.  As before, copied over from my Goodreads shelves, with some additional comments in italics.

I’ve liked previous books in this series, but this one was a bit of a disappointment. The plot was ever-so-slightly OTT and I never really believed in the characters’ motivations. And okay, I never quite came to like Kendall herself.

I loved the first three books in this series, but the more recent ones have missed the mark somewhat.  I’m still going to be getting the next book in this series – whether I then continue really depends on how much I like it!

City of Fallen Angels by Cassandra Clare (YA urban fantasy)

Well. This sort of read like fanfiction for the original trilogy.

The expanded version (because this sounds as though I’m disparaging fanfiction, and I’m not – I love good fanfic, operative word being good) is that well, I didn’t quite see the point of this book.  It wasn’t a new story – instead it took the original trilogy and sort of negated that story arc.  And the characters stagnated.  Does that make any sense?

I am loving the fact that Sharon Lee & Steve Miller are releasing their Liaden Universe chapbooks in ebook format.

This one was another great “fill-in-the-gaps”-type short story – we get to see Miri from another person’s perspective, and it had a totally satisfying ending.

Oh yes, I continued my Liaden short story glom.  Can you tell I was thrilled to be able to read their backlist in e-format?

I really liked this one – it had my favourite Liaden characters in it, and as I said, it took a previous short story and just added so much more depth and colour to it.

Alien in the Family by Gini Koch (SF romance)

And this book, unfortunately, is where I draw a line under this series.

Don’t get me wrong – it’s still fun, but in the end, there were too many things that niggled me about the book to get into it and continue with the series.

It felt as though there were too many plotlines, combined with some slightly-off pacing and plotting – the big action finale takes place around three-quarters into the book, with the last quarter focusing on Kitty/Jeff’s wedding… which had zero conflict or tension.

Also, trying to keep the character names straight drove me mad – for instance, Kitty would think of someone as Reader, but call him James. There were more than enough characters already – having different names for each person made it even more difficult to remember who was who.

And finally, this came across as a bit of a throwaway comment in the book, but really pulled me out of the story and was possibly the tipping point in my decision to finish with this series: [spoiler – highlight to read] Kitty gets changed into a sexy outfit, the other character essentially tells her to get a cover-up and then they have this exchange:

He took my shoulders and turned me around. “God, it’s as bad from the back. Really, go put on some clothes.”

“Find one. Before I rape you.” He gave me a gentle push toward the bedroom.

Fair enough – there had been some romantic tension between these two previously and this was meant as a joke, but seriously?? I thought we had moved on from rape being a female’s fault for dressing “inappropriately” – even as a joke. Aarrghh. However it was meant, I have to say this episode yanked me out of the story and had me fuming a little. I would have said I don’t normally get on my high horse about books having to have the RIGHT message, but really.

[end spoiler] I just don’t have enough invested in either the characters or the story to continue reading this series.

Oooh, I had a bit of a rant here – it was my feminist side getting up on a soapbox.  But I’m not continuing with this series – my non-enjoyment was starting to outweigh my enjoyment.

Slightly mixed feelings on this book, not one of the stronger Malloren books, IMO.

What I didn’t like first – and these are very much YMMV* things: One of the plotlines I’m not particularly keen on is when characters purposely mislead others, and this formed one of the bigger conflicts in this book. Secondly, Jo Beverley has always excelled in historical detail, which is why I love reading her books, but this book was possibly too realistic in parts – and with her spelling out the chasm between local gentry and the aristocracy, I sometimes felt the obstacles to a forever kind of HEA were too much. Prudence didn’t come across as having the strength/character to eventually grow into the role demanded of Cate’s countess. And I found the eventual villain and explanation slightly over-melodramatic.

Having said all that, I liked Prudence and Cate’s relationship – their initial attraction to each other and subsequent romance felt very organic and real. And I was fascinated by the feudal nature of the Yorkshire society and the non-London settings – most historicals are set in London society so this was a refreshing change.

So yes, a good read, but not a keeper for me.

*YMMV = Your Mileage May Vary

Jo Beverley has written some books which were keepers for me, but her recent ones have been more solid reads – still good, but lacking that spark that elevates them to magic reads.  Her new release is coming out soon-ish, IIRC – I’ll be getting it but possibly not rushing out to buy.

Alien sex just doesn’t do it for me – however, great premise and good writing. I’d read more by Jamie Craig, I’ll just steer well clear of anything with a hint of aliens.

Paris A to Z by Marie Sexton (contemporary m/m romance)

I’m probably in the minority here, but this book didn’t really work for me. Maybe because it’s been a while since I’ve read the previous books, but I kept on losing track of who was who. It felt a bit like because the author knew her characters so well* that there was a lot of assumed knowledge which didn’t necessarily translate well to someone not as fully invested in the world she had created.

*And to be fair, it’s book 6? I have read the previous books, I swear.

I know a lot of people loved this.  It just didn’t work for me.

The Mask of Night by Tracy Grant (historical mystery)

It has been quite a while waiting for this book, and it was a pleasure to sink back into Tracy Grant’s complex world of Regency intrigue.

I love how things were not always what they appear to be at first glance, and how Ms Grant peels away the layers of the various relationships in this book, each reveal providing a fresh take on things. Melanie and Charles’ relationship remains rather complicated – the revelations in the previous books have put their marriage at risk, but they are both determined to work at it and learning to trust each other again. Painful, but potentially so rewarding.

I will say the sheer number of characters and the rather intricate political plotting lost me at times – possibly not helped by it being years since I’ve read the previous two books. But I have the latest book, Vienna Waltz, in my TBR pile, and am looking forward to reading more in Ms Grant’s world.

I’ve been meaning to start VIENNA WALTZ for ages now – it’s been sitting on my Kindle for months and I still haven’t opened it.  I think it’s because Tracy Grant’s books require a level of mental concentration to really get the plot – one that has been sadly lacking on my part for a while…

6 thoughts on “More Mini-Reviews (with Some Goodreads Rating Thoughts)”