Sometimes all you need is a really good book to get you out of a reading slump.

I’ve been seeing mentions of Naomi Novik‘s new fantasy release around the blogosphere, but wasn’t that interested because I haven’t been that convinced by the more recent installations of her Temeraire series and wasn’t sure if UPROOTED would be worth the hardcover price.

But I just so happened to be in a bookstore the other weekend, and they had UPROOTED on their display stands.  The cover caught my attention (I admit to an unashamed bias towards the UK cover) and so I flipped it over and read the back cover blurbs.  Guess what sold me? 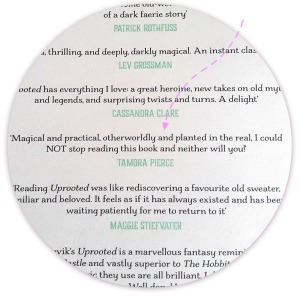 So – I’m a sucker for pretty covers and blurbs from my favourite authors… sounds about right.  I’ve been caught out before, but this time around, both were reliable predictors of a really good read.

The back cover description:

Agnieszka loves her valley home, her quiet village, the forests and the bright shining river. But the corrupted wood stands on the border, full of malevolent power, and its shadow lies over her life.

Her people rely on the cold, ambitious wizard, known only as the Dragon, to keep the wood’s powers at bay. But he demands a terrible price for his help: one young woman must be handed over to serve him for ten years, a fate almost as terrible as being lost to the wood.

The next choosing is fast approaching, and Agnieszka is afraid. She knows – everyone knows – that the Dragon will take Kasia: beautiful, graceful, brave Kasia – all the things Agnieszka isn’t – and her dearest friend in the world. And there is no way to save her.

But no one can predict how or why the Dragon chooses a girl. And when he comes, it is not Kasia he will take with him.

This was basically one of those books I gulped down, staying up very late to finish “just one more chapter…”.  Naomi Novik’s UPROOTED is that rare thing in today’s fantasy – a wonderful standalone novel that leaves you completely satisfied at the last page.

The story drew me in from the first, right from the point the Dragon made his surprising choice, and I was enthralled all the way to the end.  Novik manages to make UPROOTED feel familiar and yet unfamiliar at the same time.  It was familiar enough that I had enough of an inkling as to how Agnieska’s story would unfold, but the various twists and turns – both in terms of plot and characterisation – kept this from being a tale I’ve read before.  The final reveal and eventual resolution managed to be both unexpected yet logical, tying together all the various hints dropped throughout.

I so appreciated the strong female characters in this book here, and loved the strong friendship between Agnieska and Kasia.  It’d have been so easy to set up Kasia and Agnieska to be on opposing sides and to paint Kasia in an unflattering light – I’m glad Novik didn’t choose that route.  Also, the Dragon – I don’t want to spoil too much, but I enjoyed seeing Agnieska’s perception of him evolve throughout the book as he moves from being the all-powerful Dragon to, well, still a very powerful magician, but also a human being.

Only niggling negative for me is the body count – let’s just say the numbers climb quite a bit.  Most happen (slightly) off-page to be fair, and create this atmosphere of ever-higher stakes as things reach a climax.  This contributed towards the fairytale-like aspects of the book for me – I always feel that fairytales have this veneer of pretty glossiness over some very scary and grim bits.

But this is probably one of the very few books where I’ve paid full retail price for a while (and hardcover prices at that), and I don’t regret that one bit.  UPROOTED is a really lovely fantasy, and without a doubt, one of my favourite books this year.