I thought I’d have more time for blogging now that summer’s over… and then Davis Cup happens.  It’s been an edge-of-seat type of TV spectating over the past couple of days.

Also, rugby.  I’m not a massive rugby fan (understatement of the year).  Let’s just say that I can barely describe the rules of the game (“you need to get the ball to the other side of the field and then you can kick it through the posts for a conversion” is pretty much the extent of my knowledge), but somehow, the fact the World Cup is taking place in the UK has meant I’ve been watching more rugby matches in the past two days than I have in the past year?

So that was a roundabout way of saying that I was planning on writing a couple of reviews*, but instead here are some links and musings… 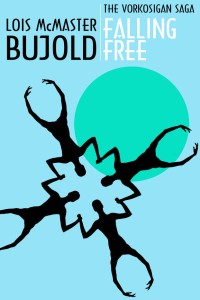 Lois McMaster Bujold posted the new cover of FALLING FREE – the first book in her Vorkosigan series, if you go by internal chronological order.

I’d never recommend starting the series with FALLING FREE though – IMO it’s probably best read once you’ve finished all the other books because (a) it’s pretty stand-alone and (b) it’s not her best book by far.  It helps fill in some of the blanks and history, but I tend to suggest new readers start with THE WARRIOR’S APPRENTICE.  I started with CORDELIA’S HONOR myself (an omnibus version of the two books set before TWA) and while I liked both Aral and Cordelia, I didn’t feel the need to continue with the next books.  And then I read TWA, and pretty much devoured the entire series in a couple of months.

Anyway, new cover!  I like it a lot better than her previous self-pubbed versions – the cover artist, Ron Miller, posted in the thread:

…  As I told Lois, too many of her past covers have scarcely done her justice (and not just because they weren’t accurate in details—that’s not really a prime consideration—they were just plain bad art). After two or three false starts where I was going in a more realistic direction, I realized that what she was after was a graphic style that I’d always admired—and have had little opportunity to indulge in. Which made the whole project immensely fun and rewarding for me. The goal, of course, was to create images that were not only meaningful to existing readers, who would be already familiar with the stories, but also attractive to brand-new readers as well…a sometimes tricky balancing act. I can only hope we succeeded!

I totally agree LMB’s not had the greatest luck with covers (though I quite liked the CAPTAIN VORPATRIL’S ALLIANCE cover).  I’m glad she’s found an artist who can translate her vision into (hopefully) commercial covers – am looking forward to seeing the next set.

I haven’t been watching the TV adaptation of Diana Gabaldon‘s OUTLANDER, mostly because it’s not on free-to-air TV here in the UK.  But from what I gather, it’s been a pretty good adaptation?  Also, casting appears pretty good in terms of matching the mental images I have of Claire and Jamie.

Diana Gabaldon’s writing the script for one of the Season 2 shows, and she posts about the experience here – it’s an interesting read, even if you haven’t been watching.  Also, funny:

P.S. I had breakfast with George R.R. Martin shortly after the agreement that I’d do a script, and mentioned it to him—knowing that he’d done a good deal of television writing before taking to novels. He laughed and said, “Oh, so you’re about to learn the Great Secret of screenwriting!”

“Reckon so,” I said. “And what’s that, George?” He leaned toward me conspiratorially and said, “It’s MUCH easier than writing a novel!”

No, I haven’t watched GoT either.  Yes, I live under a rock.

I love the intricate world-building of Seanan McGuire‘s Toby Daye universe, and was thrilled to see her do more Q&As  about Toby’s world in the lead-up to the release of A RED-ROSE CHAIN.  It’s always fascinating to learn more about the fantastical world that she’s created, especially when it becomes obvious that we see in the books is only the tip of the iceberg.

*One of those reviews is for Kate Elliott‘s COURT OF FIVES, which I won in a giveaway.  Notable as I very rarely win anything, and then a month later, I won Groupee’s Open Road Media SciFi bundle (offer’s closed now, but it was an excellent bundle).  It was a good month! I promise I’m not saying this because I won the Groupee giveaway, but I love Open Road’s SF/F catalogue.  They publish backlist SF/F, and whoever curates their selection has very good taste.