There’s quite a few new releases on my radar this month.

There are no mistakes in love.

Captain of the soccer team, president of the Debate Club, contender for valedictorian: Taylor’s always pushed herself to be perfect. After all, that’s what is expected of a senator’s daughter. But one impulsive decision-one lie to cover for her boyfriend-and Taylor’s kicked out of private school. Everything she’s worked so hard for is gone, and now she’s starting over at Hundred Oaks High.

Soccer has always been Taylor’s escape from the pressures of school and family, but it’s hard to fit in and play on a team that used to be her rival. The only person who seems to understand all that she’s going through is her older brother’s best friend, Ezra. Taylor’s had a crush on him for as long as she can remember. But it’s hard to trust after having been betrayed. Will Taylor repeat her past mistakes or can she score a fresh start?

Sharon Lee & Steve Miller’s ALLIANCE OF EQUALS (SF): This is my current book on the go, and it’s keeping me occupied (in between watching tennis points!).  Some of the plot threads from previous books appear to be coming to fruition in this one, so hurrah.

Beset by the angry remnants of the Department of the Interior, challenged at every turn by opportunists on their new homeworld of Surebleak, and somewhat low on funds, Clan Korval desperately needs to reestablish its position as one of the top trading clans in known space. To this end, Master Trader Shan yos’Galan, aboard Korval’s premier trade ship, Dutiful Passage, is on a mission to establish new business associations and to build a strong primary route that links well with existing Loops and secondary routes.

But reestablishing trade and preserving the lives of the few remaining members of the clan aren’t all of Korval’s problems. Matters come to a head as Dutiful Passage, accustomed to being welcomed and feted at those ports on its call-list, finds itself denied docking, and blacklisted, while agents of the DOI mount armed attacks on others of Korval’s traders, under the very eyes of port security systems.

Traveling with Dutiful Passage on this unsettling journey is Padi yos’Galan, the master trader’s heir and his apprentice. Padi is eager to make up for time lost due to Korval’s unpleasantness with the Department of the Interior. She is also keeping a secret so intense that her coming of age, and perhaps her very life, is threatened by it.

Sarina Bowen’s STEADFAST (contemporary romance): The first book in this trilogy, BITTERSWEET, came out last month, and it totally whetted my appetite for Jude’s story.  I could get on board with this trend of releasing books in quick succession…

Jude lost everything one spring day when he crashed his car into an apple tree on the side of the road. A man is dead, and there’s no way he can ever right that wrong. He’d steer clear of Colebury, Vermont forever if he could. But an ex-con in recovery for his drug addiction can’t find a job just anywhere.

For Sophie Haines, coming face to face with the man who broke her heart is gut-wrenching. Suddenly, he’s everywhere she turns. It’s hard not to stare at how much he’s changed. The bad boy who used to love her didn’t have big biceps and sun-kissed hair. And he’d never turn up volunteer in the church kitchen.

She knows it’s foolish to yearn for the man who returned all the heartsick letters she wrote him in prison. But the looks he sends her now speak volumes.

No one wants to see Sophie and Jude back together, least of all Sophie’s police chief father. But it’s a small town. And forbidden love is a law unto itself.

Rachel Caine’s PAPER AND FIRE (YA fantasy): I had a good time with the first book in this series so bring on the second.  Also obviously – libraries.

With an iron fist, the Great Library ruthlessly controls the knowledge of the world, forbidding the personal ownership of books in the name of the greater good.

Jess Brightwell has survived his introduction to the sinister, seductive world of the Library, but his life and the lives of those he cares for have been altered for ever. Embarking on a mission to save one of their own, Jess and his band of allies suddenly find themselves hunted by the Library’s deadly automata and forced to flee Alexandria.

But Jess’s home isn’t safe any more. The Welsh army is coming, London is burning, and soon Jess must choose between his friends, his family, or a Library willing to sacrifice anything and anyone in the search for ultimate control …

JL Merrow’s BLOW DOWN (M/M contemporary romance): I find my experience with JL Merrow’s books a bit hit-or-miss, but her Plumber’s Mate series has definitely been on the hit side so far.

Death is what happens while you’re making other plans.

The last thing newly engaged plumber Tom Paretski needs is to stumble over another dead body. He’s got enough on his mind already as the reality of his impending marriage sinks in. Not only is his family situation complicated, his heroism at a pub fire made him a local celebrity. Now everyone and their uncle wants a piece of his psychic talents.

Hired to find a missing necklace, Tom and his fiancé, private investigator Phil Morrison, wind up trying to unmask a killer—and there’s no shortage of suspects, up to and including the local bishop himself.

As Tom and Phil try to uncover the truth, they find themselves pulled in all directions by the conflicting pressures of their families and their own desires. But the murderer they’re up against is a ruthless schemer who won’t hesitate to kill again. If Tom and Phil aren’t careful, their love—and all their plans for the future—could be blown down like a house of straw. 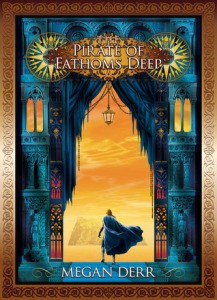 Megan Derr’s THE PIRATE OF FATHOMS DEEP (M/M fantasy romance): I’m not usually one for fluffy romance, especially fluffy fantasy romance, but the first book in this series somehow hit the right buttons for me.

High Commander Lesto Arseni is the most feared man in the Harken Empire. None but the High King dares risk his wrath—and a pirate who once punched him in the middle of the imperial pavilion. A pirate who later snuck away with Lesto to an empty room, touched him in ways far more memorable. And then immediately bolted like a man who’d gotten what he wanted.

Shemal just wants to live a normal life, leave his pirating days behind him and prove that he’s respectable now. The last thing he needs is the two idiots who show up wanting his help with the noble they’ve kidnapped—the very man Shemal had been hoping to prove himself to, the man he hasn’t forgotten since Shemal punched him a year and a half ago.

7 thoughts on “Books for July”